Today The Times newspaper has published a short article about the campaign along with a letter signed by 33 academics who are opposed to the Museum’s closure.

The article appears on page 18 (click the image to enlarge, then hit back on your browser to return to this post):

The letter appears on page 29 (click the image to enlarge, then hit back on your browser to return to this post):

We’re delighted with this significant national coverage and would like to thank those who both organised and signed the letter published today.

Last night’s ITV Anglia News broadcast an excellent package on the threat to the Cromwell Museum and interviewed Bob Pugh of the Friends of the Museum. You can watch it here:
http://www.itv.com/news/anglia/update/2014-01-24/cromwell-museum-is-threatened-with-closure/

Filming took place on Friday ahead of today’s signature collection in Huntingdon town centre.  Many of those who signed the petition said that they were aware of the proposed closure of the Museum due to coverage received in local newspapers and regional television.

Huntingdon was busy with shoppers today and the full count could again run into hundreds gathered in just a few hours.  We will update you in the coming days on the total number of signatures received to the Cambridgeshire County Council petition, collating the online and paper copies – we have until 5 February to reach the target of 3,000 which will force a full debate of Council on the proposed closure of the Museum.  Please encourage anyone you know who supports the campaign but who may not have signed the petition to do so as soon possible.

If you live/own a business/work/attend a school or college in Cambridgeshire….
…then please sign the Cambridgeshire County Council ePetition against the proposed closure of the Cromwell Museum here:
http://epetition.cambridgeshire.public-i.tv/epetition_core/community/petition/2545
…and the SurveyMonkey petition here:
https://www.surveymonkey.com/s/CromwellMuseum

If you do not live/own a business/work/attend a school or college in Cambridgeshire but do want to express your concern about the proposed closure of the Museum…
…please add your name here:
https://www.surveymonkey.com/s/CromwellMuseum 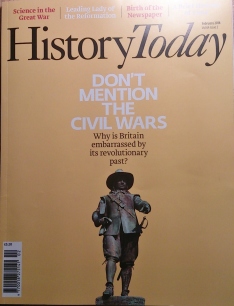 The oldest and most respected history magazine in the UK has this week published an article by Patrick Little, Chairman of the Cromwell Association, bringing the campaign to save the Cromwell Museum to a national audience.

The piece can be viewed online here:
http://www.historytoday.com/patrick-little/save-cromwell-museum

Little concludes his piece by quoting the man himself:
“In August 1650, when addressing another intransigent body – the General Assembly of the Scottish Kirk – Oliver Cromwell begged them to ‘think it possible you may be mistaken’. We can only hope similar pleas will be heeded by Cambridgeshire County Council in 2014.”

The magazine’s headline is ‘DON’T MENTION THE CIVIL WARS’ and the cover article, Reluctant Regicides (p18), by Richard Weight and Toby Haggith, asks why modern Britons still find it so hard to acknowledge their revolutionary past.  This only emphasises the importance of a Museum which interprets one of the key figures of the Civil Wars.

History Today (Volume: 64 Issue: 2 2014) – which features a striking image of the statue of Oliver Cromwell at St Ives on the front cover – is on sale now.

If you live/own a business/work/attend a school or college in Cambridgeshire….
…then please sign the Cambridgeshire County Council ePetition against the proposed closure of the Cromwell Museum here:
http://epetition.cambridgeshire.public-i.tv/epetition_core/community/petition/2545
…and the SurveyMonkey petition here:
https://www.surveymonkey.com/s/CromwellMuseum

If you do not live/own a business/work/attend a school or college in Cambridgeshire but do want to express your concern about the proposed closure of the Museum…
…please add your name here:
https://www.surveymonkey.com/s/CromwellMuseum

If over 3,000 signatures are recorded on the Cambridgeshire County Council ePetition, we can ask for it to be debated at a meeting of full Council.  The SurveyMonkey petition will be presented as evidence of the strength of feeling both within, and outside, the county about the proposal to withdraw funding from the Cromwell Museum.

Thank you for your support!

On Saturday (18 January) the Friends of the Cromwell Museum gathered in Huntingdon town centre with hard copies of the Cambridgeshire County Council petition and spoke to people about the threat to the Museum.  The response was fantastic, with over 350 signatures received in two hours.

The Friends will be gathering signatures again on Saturday 25 January.  Currently the ePetition stands at 915 signatures; with the addition of signatures received in hard copy, we are approaching the 1,500 mark.  We need a really big push between now and the closing date of 5 February to get to the 3,000 signatures needed to force a debate of full Council.

If you live/own a business/work/attend a school or college in Cambridgeshire….

At the last count, the SurveyMonkey petition stood at over 2,300 signatures which is a fantastic achievement.  It will really demonstrate to the Council that the Museum is valued by people within and beyond the county, and even the country.

Thank you to Helen Drake at the Hunts Post for her permission to reproduce the photograph above.

On Saturday 18th January the Friends of the Cromwell Museum will be collecting signatures on a paper copy of the Cambridgeshire County Council petition outside the Museum from 10.30am onwards.

The signatures are mounting up on both petitions. The SurveyMonkey petition, which is open to everyone, has now received over 2,400 signatories from around the world – a fantastic achievement in such a short time.  Today we are also pleased to announce that the Cambridgeshire County Council ePetition has received over 1,000 signatures from people who live, work or study in Cambridgeshire.  However, we need more people to sign if the ePetition is to have the maximum benefit: 3,000 signatures would force a debate of full council and we have until the 5 February to achieve this number.

Sadly, it appears that, to date, lobbying has had no effect on the Council’s proposal to remove the funding from the Museum. When the draft budget was discussed at the Cabinet meeting of the County Council earlier this week, no amendment was made.

The Friends have been informed that a consultant has been hired to look at alternative options for running the Museum, with a reporting date in April.

To take a final decision before learning the outcome of the consultant’s work would, we believe,  be deeply regrettable.

The Friends were represented at the Cromwell Museum Management Committee, which took place on Tuesday 7th January.

The case for withdrawing funding was put by the Cabinet Member David Harty and the Head of Service, Christine May. It was clear in response to questions from both the Friends representative and the Local History Society representative that there was no thought-through alternative to shutting the door on the Museum if no alternative provider comes to the rescue.

The Committee learnt that an externally funded review of the viability of and options for devolving governance away from the Council was about to be commissioned, with a reporting date of 25th April.  This is after the key dates of the Cabinet meeting next week and the meeting of Full Council on 18th February. For this reason it is critical that pressure is maintained and as many people sign both petitions if eligible, or the Survey Monkey one if from outside the county.  The Friends strongly feel that no decision on the future of the Museum should be taken until that review has been received and considered.

Thank you to everyone who has supported the campaign so far. Please continue to spread the word about the threat to the Museum and the two petitions.

If you live/own a business/work/attend a school or college in Cambridgeshire….

Save the Cromwell Museum
Create a free website or blog at WordPress.com.